Police torture of a doctor and lawyer in Varanasi,India

http://ilawsites.com/tag/pvchr
Posted by People's Vigilance Committee on Human Rights at 9:58 AM 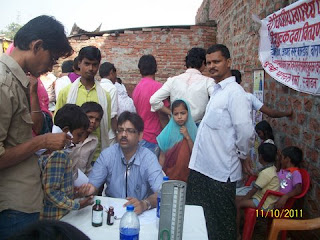 Bazardiha Health Camp
Posted by National alliance on testimony therapy at 3:00 AM


Brief Report of the Events.

South India Cell for Human Rights Education and Monitoring (SICHREM) in collaboration with St Joseph’s College and National Alliance for Testimonial Therapy (NATT) organized events to observe June 26- International Day in Support of Torture Victims on the 24 and 25th June 2011.

June 26th is the day on which the international community comes together to observe the UN International Day in Support of Victims of Torture. This day is marked with significance because it was on June 26th 1987, that the Convention against Torture, Inhuman Degrading Treatment or Punishment (CAT) came into effect (adopted in 1984). The Convention requires each State Party to take effective measures to prevent acts of torture within its jurisdiction. Importantly, to make torture a criminal offence in domestic law punishable with appropriate penalties.

As of 22nd June 2011, there are 147 State Parties, who have shown their commitment to eradicating torture by ratifying CAT and 77 states that are yet to ratify CAT - India belongs to this group. The overwhelming support of CAT in the international community underlines the importance of the norm prohibiting torture in international law.

SICHREM in Karnataka has documented 69 cases of illegal detention, torture, encounters(extra judicial killings), deaths in police & judicial custody from January 2011 to June 2011(6months), and has filed complaints with the State Human Rights Commission (SHRC), courts of law, Government of Karnataka, the Police department and other human rights institutions.

Sadly, the practice of torture remains a pervasive feature of India’s criminal justice system and society more widely. In this regard, it should be noted that instances of torture are not confined to police custody and interrogation situations. In a variety of other settings, particularly in the private sphere, vulnerable groups are subjected to standards of treatment which are no less severe than those meted out in police custody. Consider for example, the emotional and physical ordeal endured by women harassed and discrimination based on gender; the plight of young children forced into labor, subjected to verbal, physical and sexual abuse; the suffering caused by social boycotts on marginalized groups, and the severe inhumane forms of atrocities perpetrated by upper castes and law enforcement authorities on Dalits. It is a well known fact throughout the country that torture is prevalent, with the victims being largely drawn from the poor & marginalized in society. These examples serve to reinforce the prevalence of many forms of torture in our society and the need for effective mechanisms to eradicate torture.
This being the statement and the theme, SICHREM in collaboration with St Joseph’s College and National Alliance for Testimonial Therapy (NATT) initiated a journey to create awareness for the benefit of the general public and students to know about evils of torture and the remedies available. 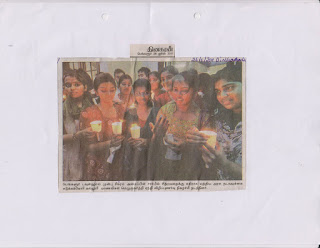 Report for PVCHR[1]
Posted by National alliance on testimony therapy at 10:37 PM

Giving Voice in Hindi
Posted by National alliance on testimony therapy at 3:47 AM

A ten days TOT workshop on Testimony Therapy for the survivors of torture and organized violence was conducted at Silchar, Cachar, Assam. As a part of the workshop a ceremony to honour the survivors of torture and organized violence, who are struggling for justice, was held at Banga Bhavan, Silchar on the 13th September, 2011. The program was organized by the joint endeavors of Barak Human Rights Protection Committee (BHRPC), Peoples Vigilance Committee on Human Rights (PVCHR), Rehabilitation and Research Center for Torture Victims (RCT) and National Alliance on Testimony Therapy (NATT). Eminent personalities of the locality attended the Honor Ceremony. The meeting was presided over by Mr. Manindra Sankar Gupta (Retd. ACS), the Chairperson of BHRPC.

Mr. Neharul Ahmed Mazumder, Secretary General of BHRPC, delivered his speech on the purpose of Testimony Therapy and the Honor Ceremony. He dwelt on the need of psychological rehabilitation of the traumatized survivors of torture and organsed violence which aspect is neglected in human rights works. Hence, there was an urgent need for such type of trainings to serve the victims in a better way.

Ms. Shirin Sabana Khan in her very brief speech told about the experiences of working with BHRPC, and about the pattern of torture and human rights violation in the valley. She also added that there remained a lot to work with BHRPC. Ms. Khan further told about various aspects of testimony therapy.

Mr. Nirmal Kumar Das, member of BHRPC, read out the testimony of Mr. Kalam Uddin Choudhury, who is a survivor of torture by the personnel of the Indian Army. Though all the doors are shut by the human rights institutions of India, still Kalam is fighting for justice in legal forum and trying to attract the helping hands of the organizations and individuals. Mr. Kalam is a poor mason apprentice and lost his mental and physical strength to a large extent after the excruciating experience of torture. Kalam was called upon on the stage and honored with garlands and Uttaria (shawl), at the same time slogans against torture as well as slogans hailing Kalam’s struggle for justice raised in the hall. Mr. Lenin Raghubanshi handed over the beautifully printed testimony to Mr. Kalam Uddin Choudhury, The hall was filled with claps and slogans.

The testimony of Miss Mina Begum Choudhury, a secondary victim of organized violence was read by Miss Chaya Kumari, a member of PVCHR. Mina lost her brother in this incident, and her parents alongwith her uncle also faced inhuman torture. She lost her property and shelter. Still she is facing hard as her opponents are very close to the heavyweight political leaders of the locality. Mina got warm welcome when she appeared on the stage with loud slogans, claps, garlands and uttaria. Miss Sirin Sabana Khan handed over the testimony to Mina, which was beautifully printed.

The testimony of Mrs. Alimun Nessa, another survivor of torture, was read out by Sadique mohammed Laskar. Alimun Nessa lost her husband due to cruel inhuman torture in police custody. The torture to which her husband was subjected was witnessed by her. The human rights institutions has never paid heed to her complaints seriously, though all the enquiries conducted into the incident found the involved policemen guilty. Alimun, in spite of, all limitations such poverty and ignorance is still fighting for justice.

Mr. Parvez Khasru Laskar read out the testimony of Mr. Fariz Uddin Barbhuiya, who was tortured by the personnel of 147 Battalion of Central Reserve Police Force (CRPF) with his family members. Fariz is a retired CRPF personnel himself and runs his business near his house situated opposite to the CRPF camp. Fariz got warm welcome with slogan against torture and praising his bravery. He was honored with garlands and uttaria (shawl). The Chairperson then handed over the beautifully printed testimony to Mr. Fariz. He then delivered a speech thanking the organizers. He added that he has got half justice after being able to express his feelings in such a forum, and that he has got energy to expedite his fight for justice.

Mr. Waliullah Ahmed Laskar, a member of BHRPC, delivered his short speech on various provisions of national and international laws against torture. He also added that the impact of torture on individuals and in society is very serious, it creates trauma in individual and mass mind.

After that Mr. Dholu Mia Choudhury, father of Mr. Kalam Uddin Choudhury was escorted to the stage by Mr. Abdul Rahman Laskar and Mr. Abul Hussain Barlaskar, members of BHRPC. He was welcomed with garlands, Uttaria (shawl) and loud claps and slogans from the audience. Mr. Dholu Mia, a secondary victim of torture had the bitter experience of torture, when he saw his son, the only earning member of his family paralyzed after torture by the personnel of Indian Army. He received his beautifully printed and decorated testimony from Mr. Imad Uddin Bulbul.

Mrs. Aftarun Nessa Barbhuiya, wife of Mr. Fariz Uddin Barbhuiya, a secondary victim was escorted to the stage by N. Kamalini and Sarmila Singha, members of BHRPC. She received warm welcome with garlands, Uttaria, claps and slogans. She received her testimony from Ms. Shirin Sabana Khan, which was beautifully printed and decorated.

Mr. Imad Uddin Bulbul, advocate and Legal Advisor of BHRPC delivered his speech. He told that torture victims must raise their voices and testimony therapy will help to uphold the suppressed voices. He also added that BHRPC has crossed many hurdles, and it will do a lot with PVCHR and RCT.

Mr. Anup Kumar Choudhury (Advocate) and Mr. Shyamal Dey (social activist) delivered their speeches and appreciated the organizers for arranging such a unique program in the valley.

Mr. Lenin Raghubanshi delivered a pithy speech where he expressed the experiences of working with BHRPC. He cited various examples of victims becoming activists after testimony therapy, and encouraged the survivors to raise their voice against torture. He also brought to light the various issues and problems in Barak Valley.

The meeting ended after the address from the chair and vote of thanks.

http://www.pvchr.net/2011/10/detention-watch-initiative-for.html
Posted by National alliance on testimony therapy at 9:22 PM